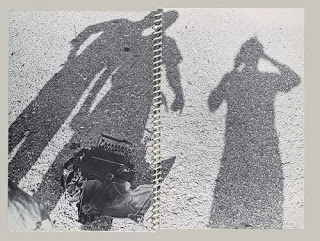 On Tuesday. June 25, starting at 6 pm, I will be participating in a typewriter event called Royal Road Test Repair, which is part of a series of field tests taking place at 1067 Pacific Street in Brooklyn, NY.

The event takes its name from a book artist Ed Ruscha, musician Mason Williams and photographer Patrick Blackwell published in 1967. They threw a Royal 10 out the side window of a Buick Le Sabre at 90 mph in the middle of the California desert and documented the resulting wreckage as if it were a crime scene. They called the book Royal Road Test.

The contours of this event are still in formation. I know this: I'll be repairing my Royal Model 10. Then I hope to do something extravagant with it. If you're in NYC, perhaps you care to share your ideas.
Posted by rn at 3:48 AM

Sorry I will miss your event.
In my stead please accept this
film from 1944,
Brian
http://archive.org/details/basic_typing_1