When Tom Wolfe died, in mid-May, I grabbed From Bauhaus to Our House from my shelf. 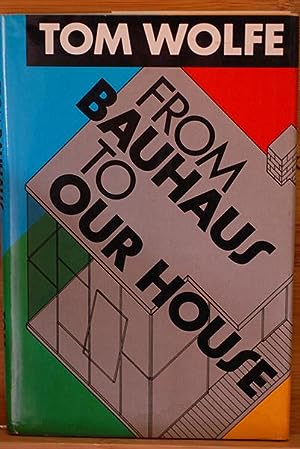 I had managed to avoid it when it came out in 1981. I was a community organizer then, and, though I was interested in writing and had read some of Wolfe’s stuff (I had soared through The Electric Kool-Aid Acid Test and jetted through The Right Stuff), I cared about issues that affected poor people not about the built form of luxury towers. And when it came to New Journalism, I relied more on Joan Didion and Norman Mailer and Terry Southern and Gay Talese and Hunter S. Thompson  than I did on Wolfe.

When I plunged into From Bauhaus last month, the first thing that struck me was how thin it was: 111 pages packed with more literary references and art history exegeses than most textbooks. Wolfe, I realized, was an erudite dude. And, of course, the book pops with Wolfe's trademark exuberant and unapologetic use of exclamation points and his lust for the best non-egotistical one-letter word in the language -- the gaping vowel O.

Still, the biggest surprise in reading From Bauhaus to Our House thirty-seven years after it was published was to discover that the book’s dominant metaphor is buttfucking.

It first arrives on page 51: diminutive Louis Kahn – Wolfe savages him as “always having a little cigar of unfortunate hue in his mouth” – hammered Yale University's big wigs so hard that they “yielded to the destiny of architecture and took it like a man.” And Wolfe gives the line a second coming in the very next sentence: “Administrators, directors, boards of trustees, municipal committees, and executive officers have been taking it like men ever since.”

And, just to make it clear that he’s talking about getting fucked up the ass, and not verbal abuse or getting slapped or any of the infinite number of other ways one can be demeaned, Wolfe trots the image out again on the next page: “And the mightiest of the mighty learned to take it like a man. Not even the bottom dogs, those on welfare, trapped in the projects, have taken it so supinely.”

You know, on your back, legs in the air.

Indeed, buttfucking is the climax, the denouement of the book. The chorus razzes shrilly, knowingly, conclusively, in the very last line of text: "And the client still took it like a man.”

Perhaps this frenzy of dickless buttfucking was what got the critics excited. Perhaps that’s what The Wall Street Journal implied when it said From Bauhaus “squeezed a funny tale out of glass and stone.” Perhaps it’s what New York Magazine meant when it saluted the book as “a search-and-destroy mission.” Perhaps it’s what People Magazine was thinking of when it called Wolfe’s opus “marvelously right.”

I mean, there's an undeniable thrill in tucking references to a taboo subject into a mass-market read. I know this first-hand: years back, I was hired to ghost-write part of a marketing textbook, and I remember being ridiculously elated that I managed to shovel the phrase “the only thing that matters is what’s between the buns” into a mortuary-worthy anecdote about rival ad campaigns by burger chains.

But, in hindsight, From Bauhaus is mostly a missed opportunity. Wolfe remains right – star architects are dicks, I'm sure, and their clients are, for the most part, cucks – but, in his pursuit of booty-sex, Wolfe neglected a larger and more important theme that was emerging just as he was writing. A new building called Trump Tower was rising on Fifth Avenue in New York City. This structure was well under way when Wolfe published the 2-part essay that became the book in Harpers in the summer of 1981. The design (by Der Scutt) was known: gaudy as hell, skinned in bronzed reflective glass with little outright ornamentation but cut on one corner like an over-wrought piece of jewelry to present 28 facets to the avenue. At its base, an ostentatious atrium draped in rose/peach/mango marble.

This fool's gold plinth was not the work of some recumbent corporate board being schtupped by a stumpy architect. Rather, it was being built, as most buildings are these days, by a developer, who used the form prescribed by modernism to fulfill a much more basic urge: the desire to maximize value.

Form follows function after all. But function, to a developer, is eternally the same: to use the full zoning envelope, to get bonuses to build even bigger, to create the most buildable, rentable, saleable square feet possible, and to get a tax break to make it all even more obscenely profitable.

What Wolfe missed, in his derisive envisioning of the haute booboisie with their heinies on public display, is that it's no longer the client who is being fucked up the ass. It's all of us. From Bauhaus to Our House, but with an unintentional new meaning.
Posted by rn at 5:48 AM No comments: