I didn’t realize what was missing when I first read the two touchstone books of New Journalism.

Here’s a scene from one of Ken Kesey’s famous LSD parties, as described by Tom Wolfe in his trailblazing bible of the 60s, The Electric Kool-Aid Acid Test:

The girl had her red and white dress pushed up around her chest, and two or three would be on her at once, between her legs, sitting on her face in the sick ochre light of the shack with much lapping and leering and bubbling and gulping through furzes of public hair while sweat and semen glistened on the highlights of her belly and thighs and she twitched and moaned, not in protest, however, in a kind of drunken bout of God knew what and men with no pants on were standing around, cheering, chiding, waiting for their turn, or their second turn, or the third until she had been fenestrated in various places at least fifty times.

And here’s the same scene from Hunter S. Thompson's Hell’s Angels: the Strange and Terrible Saga of the Outlaw Motorcycle Gangs:

I keep a crumpled yellow note from that night; not all of the writing is decipherable, but some of it reads like this: “Pretty girl about twenty-five lying on a wooden floor, two or three on her all the time, one kneeling between her legs, one sitting on her face and somebody else holding her feet … teeth and tongues and pubic hair, dim light in a wooden shack, sweat and semen gleaming on her thighs and stomach, red and white dress pushed up around her chest … people standing around yelling, wearing no pants, waiting first, second or third turns … girl jerking and moaning, not fighting, clinging, seems drunk, incoherent, not knowing, drowning …”

The details in both descriptions (which came to mind because Wolfe died, at the age of 88, on May 14) are largely the same because they came from the same source. Wolfe was not at the two-day blow at Kesey’s place in La Honda, California where the Hell’s Angels met the Merry Pranksters, but Thompson was. So Wolfe borrowed Thompson’s tapes and notes.

On that first read, I decided that Wolfe had glossed it up while Thompson was more coldly accurate.

To be fair, Wolfe set the scene this way: “a lot of them [the bikers] piled in there, hooking down beers, laughing, taking their turns, making various critiques.” But his embellishments – ‘fenestrated’ instead of penetrated, ‘furzes of pubic hair,’ ‘sick ochre light’ – hyped the supposed druggie blur. And he further disembodied the scene by framing the fucking in two weird tenses – the conditional and the past perfect progressive. Significantly, Wolfe dropped the fact, clear on Thompson’s page, that she was held down on the wood floor, and he added that she was ‘in a kind of drunken bout of God knew what.’ I suppose this was supposed to mean that she was willing.

Yet, when I checked in on Thompson's book recently, I felt that he, too, fell short. From the crumpled yellow of his note paper (creepy, isn't it, that he hung around that crude cabin long enough to take notes) to the fact that his only verbs are gerunds, his account is oddly passive, presenting an affair with little grubby atrociousness.

What I missed when I read these books decades back, and what is obvious to me visiting them again today, is that both accounts never mention penises. In both of them, this was a dickless fuck. (Thompson didn't even call the possessors of these penises men; rather, he called them ‘people.’)

Two male authors describing the same scene both made a forest of stiff pricks magically disappear.  As many as fifty erect cocks. Erased. Removed. Disposed of. Airbrushed out. Neutron bombed. Disappeared. Poof!

To put the pricks in, to describe them, talk about them, make them apparent, active, palpable, powerful, would have tilted it. Because it’s got to be fucking impossible to stick your head into a room at a party and see a hoard of bellowing men – maybe not fifty but definitely dozens – with their pants off and their dicks hard taking turns on a solitary woman who's being held down on the hard floor and think, even for a moment, even if she doesn't protest, that it might be consensual. I mean, to maintain that takes some serious work.

Wolfe’s final assessment of the scene -- “But that is her movie, it truly is, and we have gone with the flow” -- only makes sense without the dicks.

Thompson's too. Though he was clearly conflicted, he dispelled that conflict in a twist of explanation. “It was not a particularly sexual scene,” he wrote. “The impression I had at the time was one of vengeance. The atmosphere in the room was harsh and brittle, almost hysterical.” At another point he termed what he witnessed as “somewhere between a friendly sex orgy and an all-out gang rape.” In the end, though, the outlaw journalist handed up an indictment: “The Hell’s Angels, by several definitions, including their own, are working rapists . . . [ellipsis in original] and in this downhill half of our twentieth century they are not so different from the rest of us as they sometimes seem. They are only more obvious.”

‘Working rapists.’ What a phrase. A keeper. It takes in everyone from the President of the United States on down -- which makes it perfect for this godawful Sisyphean second decade of the twenty-first century.
Posted by rn at 6:27 AM No comments: 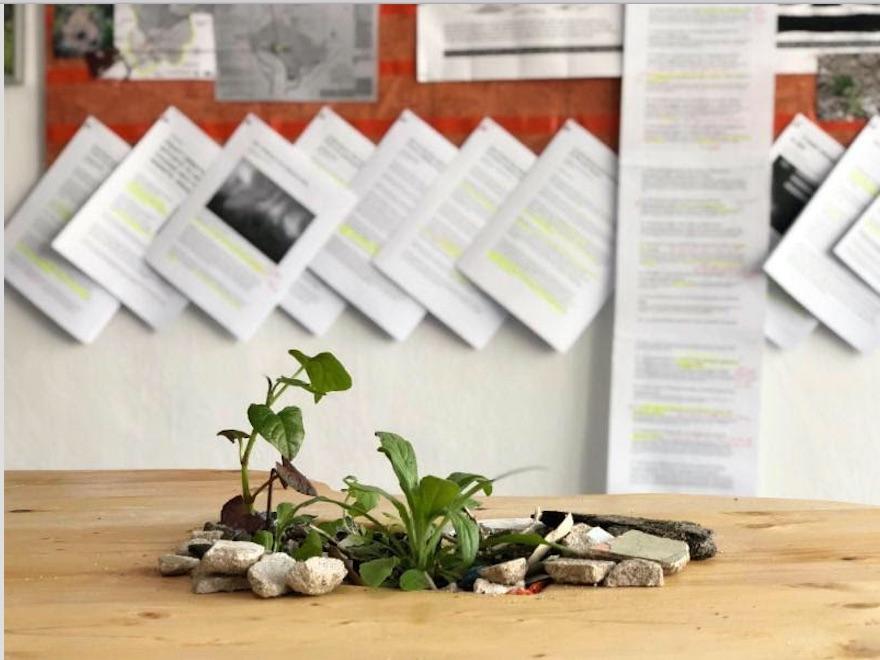 photo by Valerie Wiseman
​
The Environmental Performance Agency (EPA): Department of Weedy Affairs
Opening Reception: Saturday, May 5, 3–8pm
with "Towards Teaching a Human the Urban Weeds Alphabet" performed by EPA agent Andrea Haenggi at 3, 5 and 7 pm.

An exhibition and series of programmatic performances and workshops led by the Environmental Performance Agency (EPA), an artist collective (Catherine Grau, Andrea Haenggi, Christopher Kennedy and Ellie Irons) which imagines a governmental agency that is beyond human. 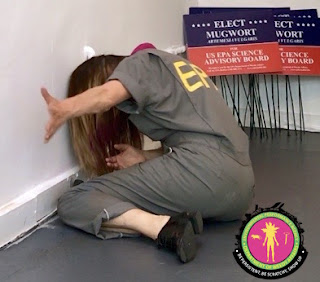 Andrea Haenggi in rehearsal @Transformer, DC
​
Posted by rn at 5:45 PM No comments: