Why was Sandra Bland charged with assault when she was the one assaulted?

Sandra Bland, whose death in police custody on July 13 after being caught in a minor traffic infraction outraged much of the nation, was only in jail because she was being held on $5,000 bond after having been charged with assaulting the state trooper who escalated her ticket into a violent arrest, according to two documents filed in court in Waller County, Texas.

According to a "Magistrate's Admonishment" signed by Judge Delores Hargrave, a local Justice of the Peace, Bland was arraigned and charged with 3rd degree felony assault at 1:20 pm on Saturday, July 11, 2015. She remained in jail because she hadn't yet posted bail. The Admonishment does not indicate if Bland was represented by a lawyer when facing the charge against her, as is her right under the U.S. constitution.

Judge Hargrave was out of her office and not available to comment on Thursday, July 23, and her staff said she would not be reachable until she returned to work on Monday, July 27.

Though Waller County courts are closed on Saturdays, judges apparently go to the jail to process people arrested on evenings and weekends.


A second document, an arrest affidavit filed by Trooper Brian T. Encinia and signed by Judge Hargrave on July 10, detailed what the officer alleged to be the assault. The trooper declared that, though she was handcuffed, "Bland began swinging her elbows at me and then kicked my right leg in the shin. I had a pain in my right leg and suffered small cuts on my right hand." Encinia also said that "force was used to subdue Bland to the ground."

A police video of the incident tells a more complete story. In it, Encinia seems to provoke the altercation after pulling Bland over for failing to signal before changing lanes at 4:27 pm on July 10. After writing up a citation and walking back to her car, he asks her to put out her cigarette and orders her out of the car. When she declines, he threatens to taser her if she does not comply, shouting, "I will light you up." A few minutes later, while Bland is still complaining vociferously about his treatment of her, Encinia radios his dispatcher to report, "I've got her controlled. She's in handcuffs."

Bland died in her cell in the county jail sometime before 9 am on Monday July 13. It is not clear if Bland ever spoke with a lawyer before her death. 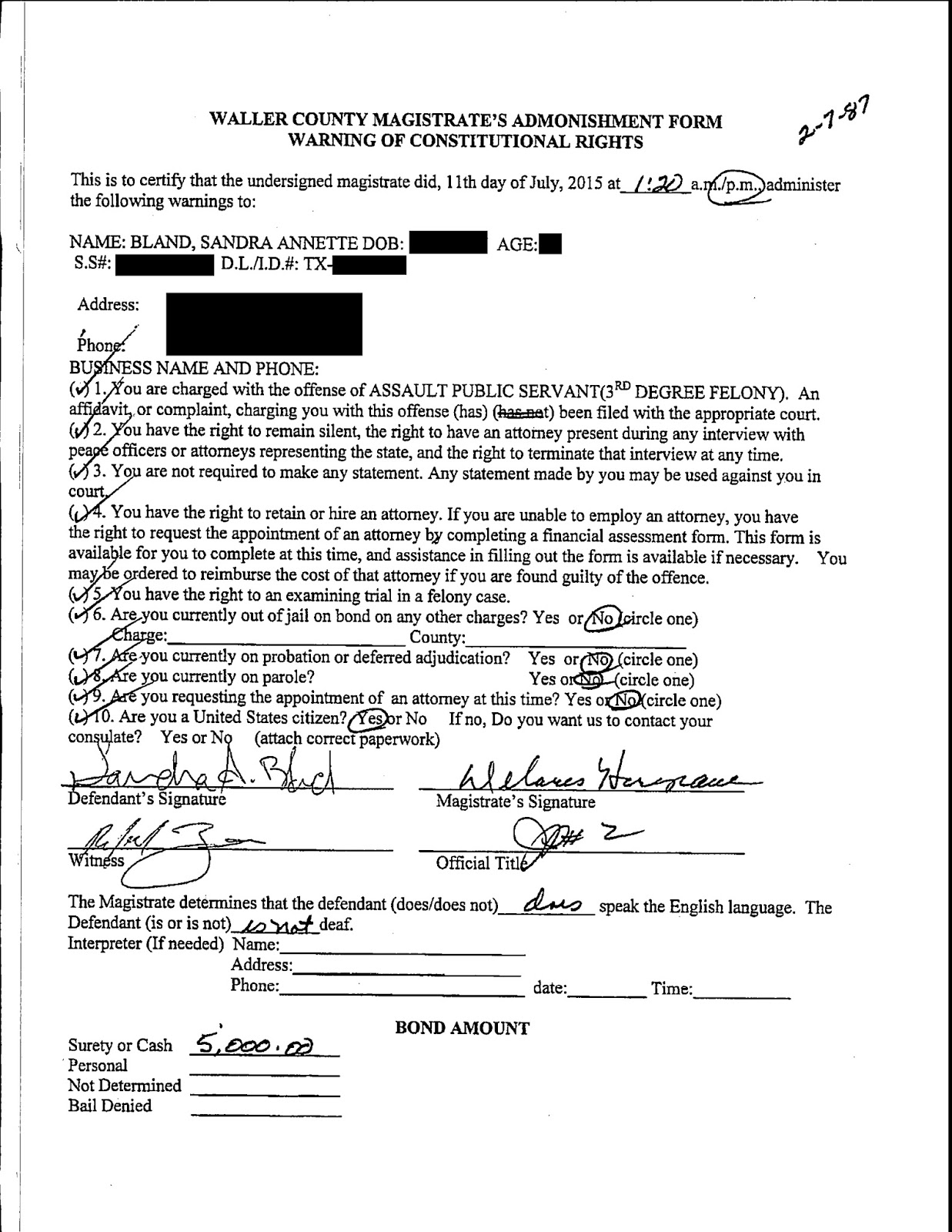